The Sagarmatha National Park is a protected area in the Himalayas of eastern Nepal that is dominated by Mount Everest. It encompasses an area of 1,148 km2 (443 sq mi) in the Solukhumbu District and ranges in elevation from 2,845 to 8,848 m (9,334 to 29,029 ft) at the summit of Mt. Everest. Sagarmatha National Park was established in 1976. In 1979, it became the country’s first national park that was inscribed as a Natural World Heritage Site. The park’s visitor centre is located at the top of a hill in Namche Bazaar, where a company of the Nepali Army is stationed for protection of the park. The park’s southern entrance is a few hundred meters north of Monzo at 2,835 m (9,301 ft), a one-day trek from Lukla. The park contains the areas of the Dudh Kosi River, Bhotekoshi River basin and the Gokyo Lakes. It is largely composed of roughed terrain and gorges of the high Himalayas, ranging from 2,845 m (9,334 ft) at Monjo to the top of the world’s highest peak Sagarmatha (Mt. Everest) at 8,848 m (29,029 ft) above sea level. In the lower forested zone, birch, juniper, blue pines, firs, bamboo and rhododendron grow. Above this zone the vegetation is dwarf-sized or comprises shrubs. As the altitude increases, plant life is restricted to lichens and mosses. Plants cease to grow at about 5,750 m (18,860 ft), because this is the permanent snow line in the Himalayas. The forests provide habitat to at least 118 species of birds, including Himalayan monal, blood pheasant, red-billed chough, and yellow-billed chough. Sagarmatha National Park is also home to a number of rare mammal species, including musk deer, snow leopard, Himalayan black bear and red panda. Himalayan thars, langur monkeys, martens and Himalayan wolves are also found in the park. 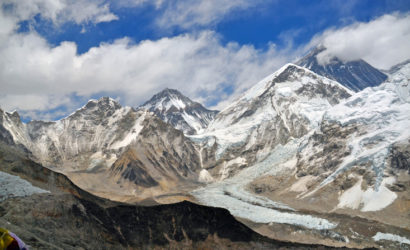 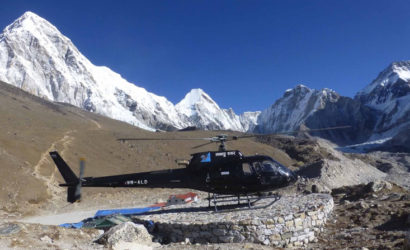